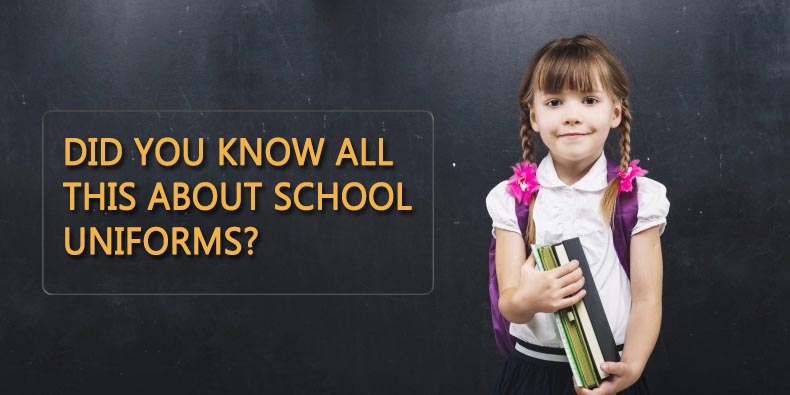 Uniforms are widely used in many schools and colleges around the world. There are numerous school uniforms for girls and boys in a variety of styles, designs and colours. This must-wear outfit has an interesting history. Though many schools make it mandatory for students to wear uniforms, there are groups of people who are against uniforms. However, across the world, most of the schools have adopted uniform culture.

England was the first country that introduced school uniforms in the 16th century. The first school in England to adopt a uniform was Christ’s Hospital. The uniform included a blue cloak and a pair of yellow stockings. Soon other schools started adopting the uniform policy. Students of the Eton College used to wear a uniform of black top hat and tails until the 1972, after which the uniform code changed.

During the initial years, the uniform was a standard for the rich and a status symbol of fineness and superiority in England. Most private schools recommended uniforms for students. The uniform suggested by most of these schools consisted of shirts, blouses, tunics, knee length socks and short trousers. Footwear and headgear also formed a part of the uniform.

Uniform in other countries

In countries like India, Indonesia, Thailand and Pakistan, school uniforms were introduced during the British Colonial Period. In Australia, school uniforms are more casual and consist of a shirt, short pants and peaked caps. The missionaries brought in the culture of wearing uniforms to the schools in Africa. The intention was to differentiate missionary students from other kids on the streets. In India, the current trend of school uniforms for girls ranges from shirt and skirt/trouser to traditional outfits like salwar kameez, depending on the region. The uniform for boys usually consists of a shirt and shorts/trousers.

In today’s world, school uniform is a badge of pride. It creates an identity for the students and gives them a feeling of belonging. Uniforms help deal with financial and class differences in students as everyone dresses the same way for school. The purpose of school uniforms is to promote team spirit, discipline and enhance equality among the students.

Unipro is a leading school dress manufacturer, who designs and manufactures high-quality uniforms for schools. Contact us for more details.